All You Need To Know About Marwari Wedding Rituals And Customs!

Marwari is the ethnic group of business owners living in Rajasthan in India. They speak Marwari language and maintain their specific cultural traits in weddings and all other social events.

Roka is the pre-wedding ceremony when the groom first visits the bride’s place with his parents and other relatives. Both bride and groom formally accept this marriage proposal and exchange gifts.

Byah Hath is a typical feature of Marwari weddings, which starts around 7 – 10 days before the wedding, participated by women from both families, to sing Mangal Geet and prepare homemade sweets called Mangodi together.

Bhaat Nyotana is the ritual of initiating the custom of sending wedding invitations to all well-wishers, after performing Naandi Ganesh Puja at home.

Raatri Jaga is a pre-wedding ritual where sacred motifs, like Swastika and Om, are drawn on the walls and floors of the bride’s house to ward off evil spirits.

Mudda Tikka is the official engagement ceremony, where the bride and groom exchange rings at the bride’s house, which is also called Sagai. 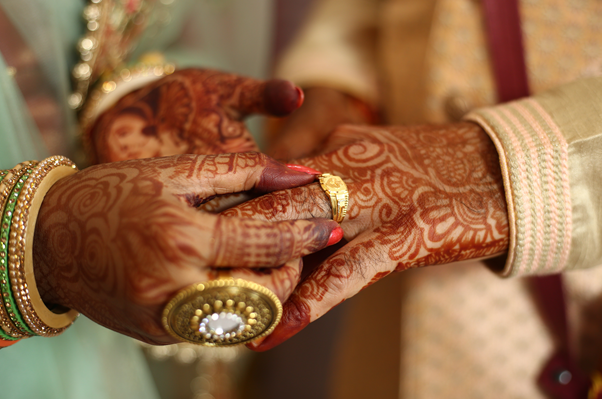 The idol of Ganesha ji is officially placed at home and worshipped for seeking his blessings for a hassle-free wedding. Griha Shanti ceremony is another puja done for preserving peace at home so that the wedding can be held peacefully without any trouble.

The common Haldi ceremony is called Pithhi Dastoor in Marwari culture, where the bride and groom are separately smeared with a paste of turmeric and sandalwood. They cannot step out of home after this ritual till they are married. 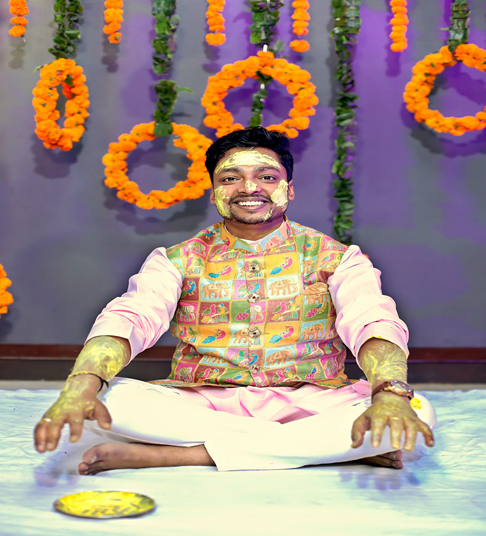 Both the bride and groom are bathed with holy water, after applying the paste of turmeric, curd, and mustard oil on them. Then they are fed special jaggery sweets named Ghungra and blessed by their maternal uncles with money as Shagun or good luck.

Beautiful designs are made with henna paste on the hands and feet of the bride, as an auspicious sign during the Mehendi ceremony. However, the Marwari groom also adorns his hands with Mehendi designs as well. 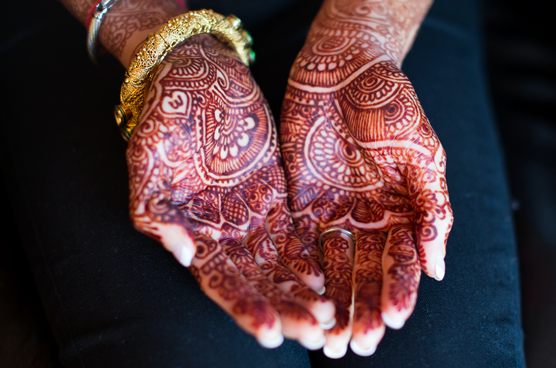 The maternal uncle and aunt of the bride bless her with several gifts and token money. They are welcomed by the bride’s mother with homemade Marwari foods.

The groom’s family gifts a bridal dress, expensive jewelry, fruits, and sweets in decorated trays to the bride. She is supposed to wear this dress and jewelry for her wedding.

Mehfil is the Marwari term for the bachelorette party enjoyed separately by the bride and groom with their friends before the wedding, with music, dance, foods, and drinks.

The male members of the bride’s family arrive with their priest at the groom’s house, to invite the groom and his family to the wedding venue and this Marwari ritual is called Korath.

Then the groom’s family members perform Ganpati Puja just before taking the groom out of the house for the wedding ceremony.

This mare is lovingly fed a mixture of rice, lentils, ghee, and sugar by the groom’s parents and it is adorned with golden accessories, as the groom is supposed to ride this mare in the procession leading to the wedding venue called Baraat.

A beautiful floral arch hang at the entrance of the wedding venue, which is called Toran and the groom must touch it after arriving here. He should also hit a Neem tree with a stick to ward off evil influence before entering the wedding venue.

The bride’s mother feeds sweets to the groom after welcoming him by performing Aarti with a lamp and flowers.

When the bride arrives at the Mandap, she gives 7 snacks called Suhalis to the groom. Then they exchange floral garlands with each other, and this ritual is called Jaimala.

Then one end of the bride’s churni is tied with a corner of the groom’s scarf, with a strong knot, which is called Granthibandhan that signifies the marital union. 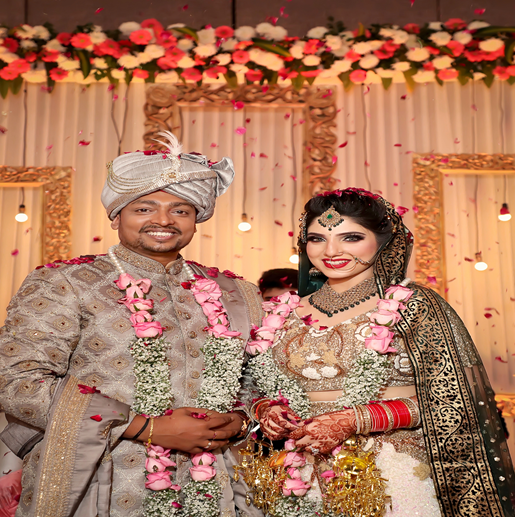 The bride’s father gives his daughter’s hand to the groom, asking him if he is willing to accept her responsibility for life. The bride is also asked if she is ready to accept his surname and family.

The groom lovingly accepts the hand of his bride from her father and this ritual is called Panigrahan, as ‘Pani’ means ‘hand’ and ‘Grahan’ means ‘to accept’ in Sanskrit.

When the bride and groom take Saat Phere or Saptapadi chanting 7 vows in Sanskrit, the bride needs to push a grinding stone with her toe and touch Mehendi paste after completing each Phere or round. It is termed Ashwahrohan and is meant to ward off all hardships. 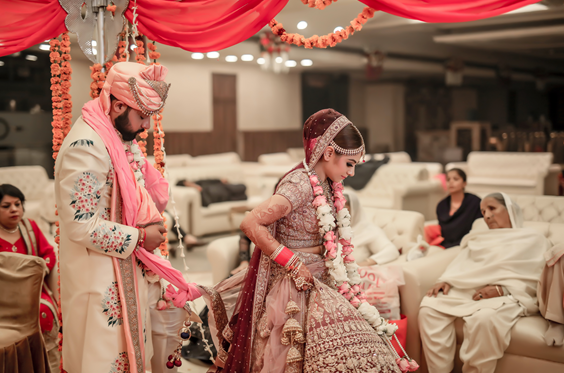 After performing other marital rituals, like Vamang Sthapna and Sindoor Daan; the groom’s father gives a bag full of coins to the bride. This ritual is called Aanjhala Bharai that signifies the bride’s financial responsibility for the family.

The groom sits on a new piece of cloth and accepts all the gifts given by the bride’s family. Then all elders from both families and their priests bless the new couple. The bride performs a puja and breaks an earthen Diya or lamp at the threshold of her parent, and this ritual is called Paharavani.

This ritual is observed when the bride leaves with her groom, bidding farewell to her family. She is given a dry coconut filled with sugar and coins, to be given to her mother-in-law. Then a coconut is smashed before their car as a positive omen.

The bride is welcomed into the groom’s house by the groom’s aunt, and she is asked to overturn a pot full of rice with her toe while entering the home. Then the bride puts her feet into a red dye and walks inside to leave her footprints. She then needs to touch jaggery, ghee, and coins, before offering puja at the house temple.

The veil covering the bride’s head is removed by any elderly lady of the family, to let everyone see her face. Then the bride touches the feet of all elders to seek their blessings, which is called Pagelagni. Her mother-in-law puts Chura made of Lac on her hands, as a mark of blessings for her marital life.

The new couple visits the bride’s house after 1-2 days, which is called Pag Phera. They spend the day there and return with many gifts given by the bride’s family.

All these rituals mark a Marwari wedding that set it different from the marriages of others living in India.